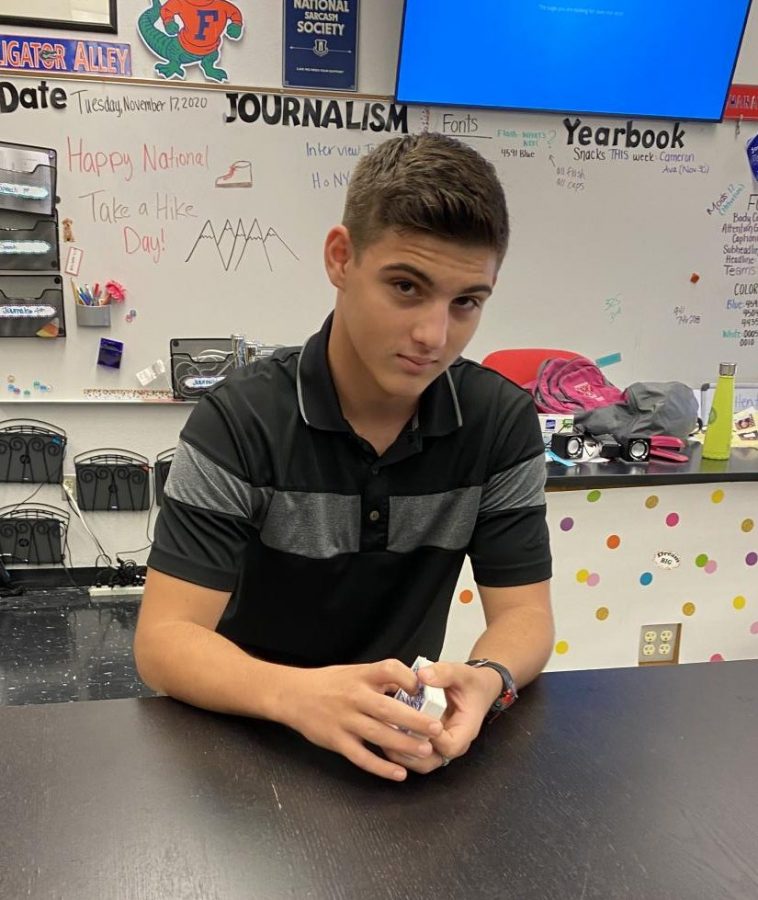 Ladies and gentlemen, you have seen him in the hallways, performing in the cafeteria and courtyard, and doing tricks at football games, showing off his illusion skills and amazing the students of Manatee. He is… Magishawn.

Sophomore Shawn Heinlein is our resident magician, performing all over the school whenever he is not in class (and even sometimes when he is). He started in 7th grade, learning from his father’s friend, and his love for sleight of hand grew from then.

“I learned my first trick from her; it was a self trick. No one would do anything besides pick one card, then the whole trick did itself, so I really didn’t have to do anything. It was really boring, though, I did that trick for maybe a month, and then it got boring for everyone around me. That made me want to be able to do more,” said Heinlein.

Heinlein has always been a performer, he enjoys dancing, participating in his third grade talent show for dance, so after he learned his first trick, he always wanted to be able to impress the people around him with more and more advanced magic, and thus, the spiral of becoming a self-made magician began.

“I just like it; it’s fun,” said Heinlein. “I like to see the people be confused because it’s interesting, you know. They’ll ask me how it’s done and I usually just give them the same answer: it’s magic.”

Through recent years of practice, Heinlein also said that he has learned how to create original magic tricks. Making many small, short ones and combining a few that he can do well, and since he makes them, he can modify and change the tricks in any way he wants.

And like everyone with a trade, he is always looking for ways to learn new tricks and keep his old ones sharp.

“Actually, I met some guy at the skate park, and he showed me a trick, so I had to trade him a trick for a trick… it wasn’t anything spectacular, but I am always looking for more to expand my vocabulary of magic,” stated Heinlein.

Besides magic and dancing, Heinlein also enjoys running and video games, like any kid his age, but magic has been his stand out hobby. When asked if he would pursue magic in the future, he stated that he was unsure.

“It’s a possibility, but I really don’t know what I want to be… a lot of people at work know me now because of this as I said, it’s a great way to meet people. It would be cool to do magic for a job or a living, ” said Heinlein.

For now, doing magic and showing it to people is just Heinlein doing what he loves without fear of what people will think of him. Heinlein is the epitome of go with the flow, and whether people enjoy his magic or not, they should appreciate and respect the kind of person that Heinlein is, one who isn’t scared to be himself.

“If you like something, I believe you should do it… I like dancing, I don’t care what people think of me, so I’ll go dancing through the halls… but it’s fun.”