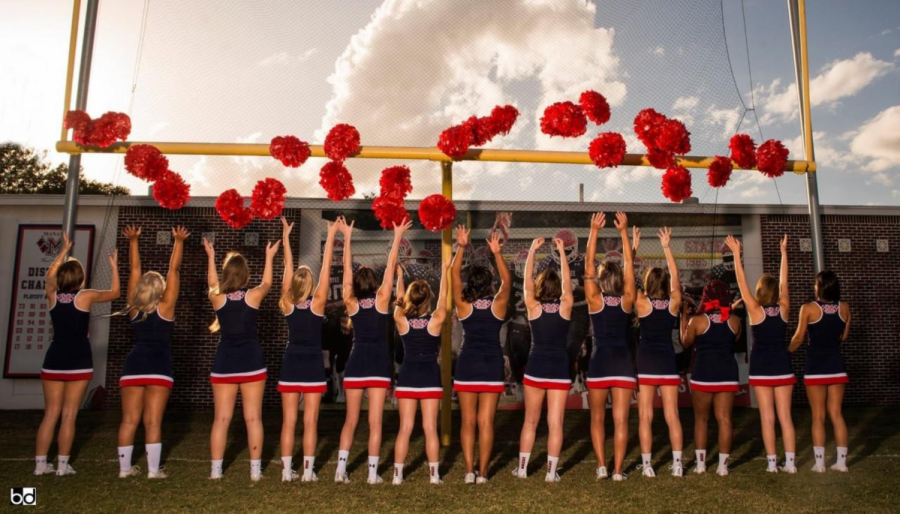 After this years’ football season, the sideline cheerleaders took their skills to an even bigger stage: the competition floor.

Captains junior Lily Parsons and senior Janessa Almodvar, along with the rest of their teammates, have been preparing for their competition season for weeks and finally, judgment hour arrived. But before they could perform, hours upon hours of cleaning routines and tireless practice were put into their performance, one that blew judges away.

Practices were held three times a week for two and a half hours each and every time, the intensity of rehearsal was taken up a notch, and the improvement was recognizable. The steady incline continued as the season progressed and the girls got better. Faster. Sharper. Stronger.

However, that was not without the occasional trouble. No team can go into a season completely stress-free. Tensions are always running high and can put a serious strain on the groups’ stability as a whole. Both Captains Parsons and Almodvar faced the struggle of keeping their team working together and solving any group issues that would interfere with the teams’ progress.

Almodvar described it as, “An obstacle I faced was the backlash I received sometimes from my teammates when trying to make the team better as a whole. ”

Now with COVID-19 and its numerous social distancing and mask mandates, new obstacles revealed themselves and had to be handled safely. This meant several of the junior varsity cheerleaders were unable to go to away games during football season and competitions were dictated by strict headcounts and organization.

“This year with COVID, we had to practice with masks, which was very hard to do. We also had limited competitions and couldn’t travel for games,” said freshman Emma Beckner, who has been cheering since seventh grade. “There was also a limit on how many people you could bring to competitions.”

But one of the most impressive feats the team managed this year was handling their mass quarantine incident.

“Twelve of us getting quarantined a day before a competition will be something we will always remember,” said sophomore Summer Walz.

The fate of the team fell into the hands of both varsity and junior varsity girls, who stepped up and took the team straight to states with their incredible performance. Even through all of the doubts and nerves that came with the competition, the long hours of practice and the pains that followed afterward, the hard work these girls put into this season created something truly special.

The team performed exceptionally and added another wonderful year to their records.  After districts on the 15th and the state competition on the 22nd, the season finally came to a close. The girls returned to their lives before cheer, Uniforms were returned and bows were added to ever-growing collections. Practice mats were piled up in the corners of the gym, not to be disturbed until the following year. No longer were their evenings full of exhausting practice and weekends full of nerves before a competition.

Whether they be in the school halls or the gym, a spark still burns bright in each and every one of them.