She knows a trick or “two”. 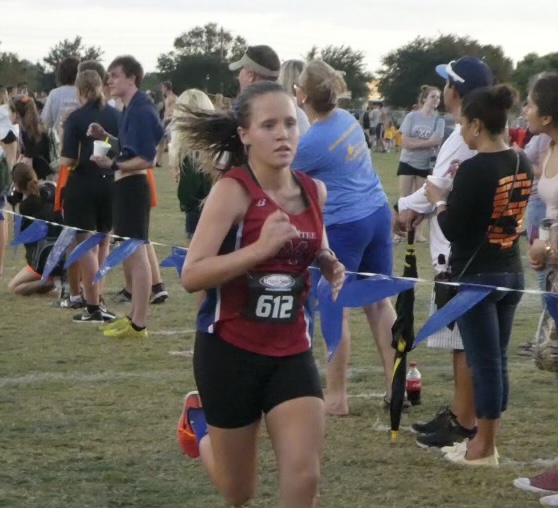 Playing one varsity sport is a handful, but playing two is a feat in itself. However, Beatrice Nichols is a senior who does just that. She is a four-year varsity athlete in both cross country and soccer and this year was chosen to be captain of the cross country team. Through her newfound leadership, she hopes to build both teams and leave a legacy behind.

Nichols began playing soccer when she was little and immediately fell in love with the sport, leading her to play all the way into high school. On the other hand, cross country is a totally different story, with Nichols starting in middle school so she could stay in shape for soccer. Now, it has become such a big part of her life that she is captain of the varsity team.

This year, Nichols wants to build a good team atmosphere. She is helping push the younger girls to do their best while also pulling the team together. She helps put together pasta nights and team bonding activities.

As the only senior on the team, she is the natural leader.

“I like holding a leadership role and it’s a lot of fun at practice to encourage the freshmen and the younger girls to stay. We always have a lot of girls join and they fall off  and this year I feel like we’re getting the team closer together,” said Nichols.

And the other girls believe that Nichols is a strong captain as well. Junior Mia Ciampi has been friends with Nichols for years and runs cross country with her. She has seen the years of practice and training that Nichols has put in to achieve her goals.

“Beatrice is a reliable leader of the team; she has never missed an event or practice and stays on top of our presence at practice. She even offers rides to and from practice to the younger girls and is really awesome with them,” says Ciampi.

High school soccer is distinctively different, instead of being the only senior this year, Nichols is one of eleven, but she says this is a great atmosphere since she and the other seniors have dreamed of playing at Manatee since they were little. Now that they are all on the field together, it creates strong bonds between them.

“Especially now that we have eleven seniors this year, and they are the same girls that I’ve played with since middle school… It makes a really good team dynamic and we work really well together especially since most of the girls play club together off the field.”

This has been a long time coming; Nichols has had this dream since elementary school.

“I’ve always wanted to play Manatee High School soccer, ever since I played rec [recreation] soccer when we were little, we would be ball girls at games, and I’ve had older friends that have played, and it’s just always been a dream of mine.”

Not only does she play two varsity sports, but Nichols also does well in school, taking multiple AP classes every year, a feat that takes a lot of time and hard work. She has spent many nights going from practice to games to homework, but Nichols said it helps that there are girls that she plays with that are also taking the same rigorous courses.

“Something that helps is that a lot of the girls I play with also take the same academically rigorous courses as me, so we work around that and take Wednesdays off on cross country so girls can work on school and focus on that,” said Nichols.

Nichols has not decided where she wants to go after high school, but she knows that it includes soccer. Whether it involves playing for fun or inter-mural, sports will never leave her.