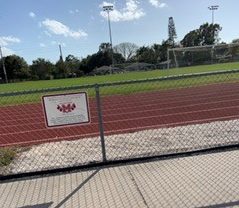 As the winter sports programs begin to prepare for playoffs, a new wave of students are preparing for the start of a season. The spring sports; baseball, softball, flag football, boys and girls lacrosse, and track and field, are all kicking off and getting ready for the season ahead. These sports start in late Jan. or early Feb. and depending on how well the team does during the regular season, could go through April during the postseason. Players and coaches are excited for the chance to get out and play.

The baseball players began conditioning after school in late Nov. to prepare both returning players and rookies for the season. Head coach and Driver’s Ed teacher at Manatee, Robert Viera is holding tryouts for the team Jan. 28-30 this year. The teams conditioning practices will come to a halt at this time and then pick up after Viera selects the teams.

The Manatee High School softball team just got a new head coach this year, Robert Moates, who teaches at Lakewood Ranch High School. Tryouts for the team are Jan. 21 at 10:00 A.M., and Jan. 22-24 at 3:30 P.M. The team had conditioning in late Nov. and early Dec. for both new and returning players, but there will be no more conditioning up until the start of the season.

Freshman Jayme Prandine is excited for the 2019 softball season when she says, “Personally, I feel this upcoming softball season will be a fun and great experience. I love softball so of course I’m excited beyond belief. I’m ready to get those dubs this season.”

Flag Football coach, Mike Alderson, is holding tryouts in late Jan. to early Feb., with the first
practice on Feb. 11, so keep a lookout for announcements and information about it come February.

Senior Hannah Cavis is excited to try out for the flag football team, even though she has never played before, she says, “I’ve never done a sport at Manatee before, but I feel pretty good because I’ve played Powderpuff and I know that it’s different but I think it will be fun.”

Boys lacrosse started conditioning in early Dec. but just got a new head coach, Johnny Mouradian. The team is conditioning with assistant coach Kendall Gay on Monday, Wednesday and Friday at 3:00 P.M.  and on Saturdays at 8:45 A.M. The season starts on Jan. 28 and the coach is going to try to keep all players (new and returning) who have come to conditioning and are committed and want to play, so there will be no tryouts.

Head coach of the girls lacrosse team, Taylor Ketcham, is holding tryouts for the team Jan. 28 and 29. Conditioning is held on Tuesdays, Thursdays and Sundays at GT Bray leading up to tryouts.

Track and Field conditioning for both boys and girls started mid-Dec. with head coach, Mike Smith. Like boys lacrosse, track and field conditioning goes right into the season, so anyone who wants to run can work to be on the team but only the best will make it.

For all new players who have not played a sport this year, a physical form must be completed and a $50 insurance fee must be paid in order to try out and play. The physical form can be received from the athletic director, Danielle LaPoint in her room located in the front office. Both the physical and insurance fee can be turned in to Lapoint. Manatee High spring sports can allow students to finish the year out right, with a feeling of pride and joy in their team and school.