“The Umbrella Academy” against the “X-Men” 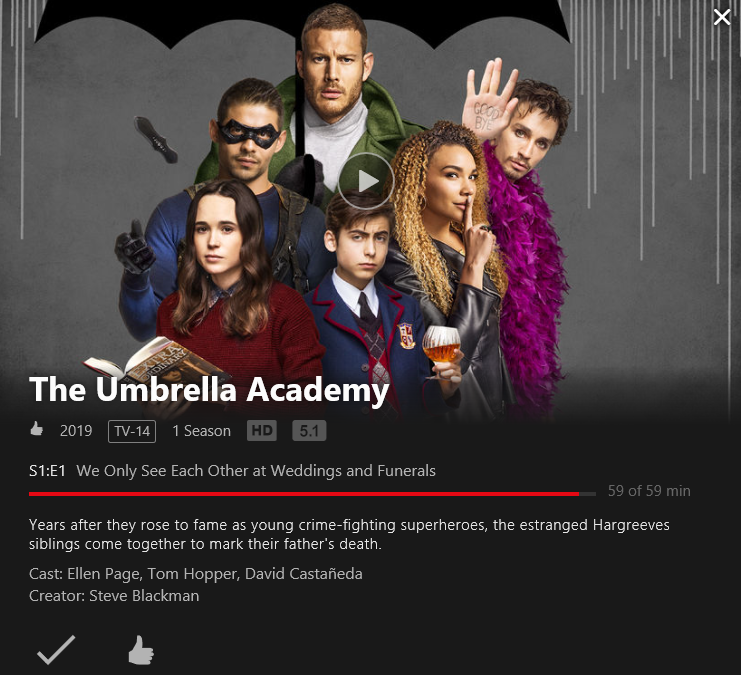 When searching for "The Umbrella Academy" on Netflix one will find a trailer, ratings, cast-list and summary of the show they're interested to watch. Danica Kormansek, a student and a Netflix watcher said, "The show seems pretty cool with all the super power stuff in the trailer."

Netflix’s newest comic book adaption “The Umbrella Academy” was released on Feb. 15 and inproves to be a huge success for viewers looking for something current and exciting to binge.

“The Umbrella Academy” is about seven siblings with unique powers that return to their loathed home to attend the funeral of their father. Their dad, Reginald Hargeeves, adopted them when the children were all spontaneously born on the same day in 1989.

The plot of this show might sound familiar to “X-Men” due to the similarities of superhuman children who have to protect the world from evil and are taken in and raised by an old man. Yet, “The Umbrella Academy” is not the “X-Men” ripoff some claim it to be. The plot might be similar but after that, the two comic properties split paths with their resemblance to one another.

Most will agree that the premise of the two franchises are similar. All of the main characters from “X-Men” and “The Umbrella Academy” were kids born with special abilities within them. Like Scott Summers, more commonly known as Cyclopes in the Marvel universe. And Number Five who can teleport, from the Netflix show.

After the basic story plot they both go their separate ways on how they deal with their problems. The “X-Men” get flown out on a jet to go fight their enemies head-on and save the day. On the other side, “The Umbrella Academy” is in a tight situation due to the fact that they do not know who their world ending enemy is. The little information they do have is from Number 5, who returns from the future, has no idea exactly how the world gets destroyed and just has the date and an eyeball. This group of heroes cannot go fly out of a jet because they have no idea how to confront their foe.

“I don’t think it’s comparable to ‘X-Men’ because in ‘X-Men’ almost everybody is a mutant but in ‘The Umbrella Academy’ it’s just certain kids born, not like the whole population is mutated,” stated sophomore Mariah Navarro, a binge watcher of “The Umbrella Academy.”

Another difference between the two would be their characters. The “X-Men” are the typical comic book characters, always doing their best even when the odds are against them; “The Umbrella Academy” heroes are not as good and optimistic in their situation, basically giving up at some points in the story.

While Jean Grey and Rouge had Professor X to take care of them in “X-Men”, “The Umbrella Academy” had Reginald who never nurtured them. He did anything he considered to be good for his kid’s superhero training, like sending Luther away to the moon on a “special mission.” Over time from their dad’s hard training and high standards they all fell from their best selves. Diego became a vigilante, Alyssa became famous by using her powers on people, Klaus got addicted to drugs and Ben died.

Ava Erickson, a student who recently watch the Netflix show said, “In ‘The Umbrella Academy’ their father collected the kids, exploited them and took advantage of what they could do and not for their well being but his own. And in ‘X-Men’ the old man [Professor X]  made a home and school for the kids who weren’t wanted anywhere else.”

Another difference between these two comic properties about heroes is that one cannot always save the day. When watching all of the “X-Men” movies and reading the comics, viewers will always see Professor X, Wolverine and the others stop the villain and save the day. “The Umbrella Academy” is not always as lucky; the cliff hanger at the end of the season one shows that the battle is lost but the war is not over for the seven siblings and they have a lot of work left to do.

If one wants to watch this creative, blood-pumping, funny show about heroes trying to do their best, season one of “The Umbrella Academy” is available on Netflix with an already confirmed season two on the way.