After more than 36 hours of Hurricane Dorian slamming the northern Bahamas, many areas will have to start from ground zero. Some of the islands saw more than 200mph gusts, flooding rains and over 20 feet of storm surge. The Abaco and Grand Bahama were two of the hardest-hit areas, which combined, hold over 70,000 people. This was the strongest hurricane ever recorded to hit the Bahamas and will cause a generation of impacts.

Red Cross spokesman Matthew Cochrane said that more than 13,000 houses, or about 45 percent of the homes in Grand Bahama and Abaco, were believed to have been severely damaged or destroyed. U.N. officials said more than 60,000 people on the hard-hit islands will need food and the Red Cross said that 62,000 will need clean drinking water.

The Bahamas are well known for their popular tourist stops like Nassau, Freeport and cruise-owned islands like Disney’s Castaway Cay. Just outside of these tourist-filled areas are many neighborhoods where people are living in poverty.

With tourism accounting for 50% of the labor workforce in the Bahamas, natural disasters like Dorian are detrimental to the economy. Some of the cruise ports are significantly damaged and may take months or more to repair. With it still being a prime time for cruise-ships to set sail, the islands are going to take a significant hit by not getting the tourists into their country.

Freshman Mary-Grace Graham visited Eleuthera a couple of years ago. Eluthera is located in the central Bahamas, so it did not receive the full impacts of Dorian; however, there was still storm surge, heavy rain and wind damage.

“I think it would look very different now. The waters were really blue, but now, probably not,” explained Graham when sharing her thoughts on how the island held up post-Dorian.

Lee Middle School has already started collecting supplies to send to the Bahamas. In recent years, they provided aid to Hurricanes Irma and Michael victims right here in Florida. ABC 7 said that the students at Lee plan to fill a 24-foot trailer full of food, water and toiletries.

There are plans to do the exact same here at MHS. The two schools will coincide with one another and Lee’s FBLA adviser Richard Daenell will head the project, making sure that the supplies go directly to where they need to go. 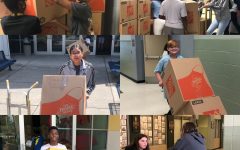 School district sends over 10,000 pounds of supplies to Bahamas

“I’ve set up transportation through Charter Captains for our supplies to go directly to neighborhoods that need it most,” said Daenell.

Starting Wednesday, Sept. 11, different clubs around campus will be collecting non-perishable foods, baby supplies and hygiene items to their club adviser’s room. Students can also take items to Ms. Thomas’s room in 7-703. In just a couple of weeks, Daenell will pick up the items and combine them with Lee’s donations.

Mrs. Babroski is collecting donations as well. She said that there is an alumnus who owns a plane and will be flying the items collected directly to the Bahamas. If one would like to help out, bring the donations to Mrs. Babroski in room 8-113 or 8-119. The deadline for this is Tuesday, Sept. 10.

Major cruise-lines like Royal Caribbean and Disney have already pledged money for relief on the Bahamas. A Royal Caribbean cruise sent a ship full of water, food and generators to the island. Many other communities and companies are providing aid as well.

The school-wide effort to raise donations will go from Wednesday, Sept. 11 to Friday, Sept. 20. Make sure to bring all donations prior to this date to ensure they all get collected and sent to where they need to go.