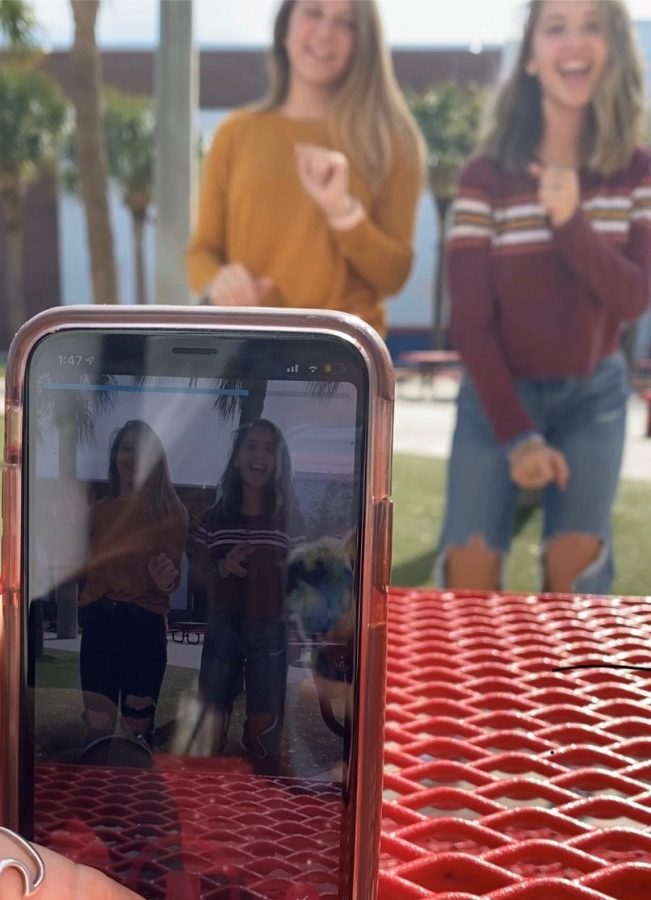 Football games here are a big deal. Fans get decked out in red, white and blue to come out and cheer on the Canes, but on the night of the Manatee vs. Sarasota game, the cheers were a little different and the signs referenced another player.

A senior at Sarasota High, Auggie Drews is West Florida’s very own internet star, with 74,500 followers on TikTok. It is the new hit social media platform that is home to short videos of anything from comedy to music, art, makeup or other genres; it has something for everyone, which makes up so much of its appeal. With over 500 million active users globally as of June 2018, TikTok has become a significant part of pop culture since its release date in September 2016, introducing new trends, challenges, and dances. This gives a platform to upcoming musicians where their songs can back videos and eventually become popular.

The same can be said for people, as with a public profile, anyone can see the videos people make. Any video could show up anywhere, leading many people and their videos to blow up, going viral seemingly overnight. No one knows where they come from, and they only stay popular if they can keep up the content on their channels, but TikTok made them famous.

Influencers on TikTok use 15-second videos to win the heart of their viewers and they receive thousands of views, and likes for simple things like dancing, drama or comedy videos that are not all that funny. The people do not even have to be well known; if the algorithm puts a lesser known person on the For You page, they have the possibility of getting them their 15 minutes of fame.

For example, Manatee High junior Nicholas Lamm had this experience on one of his TikTok videos. A video that was supposed to just be a fun reaction to their marching band grading turned into a social media hit, earning Lamm 1.3 million views and 256,000 likes on that video alone, and he does not even know how.

“I’m not sure exactly because the video has like no actual main point or anything, so I don’t know I think it just got into the algorithm of TikTok,” stated Lamm.

Lamm is not the only high school student that this has happened to, as other students like sophomore Isabella Padilla had a video with 485,300 views and 146,100 likes, and junior Lilah Bowers who posted a soccer video that got 1.4 million views and 438,800 likes.

Students like Lamm, Padilla and Bowers have not let the amount of likes on a video define them though, as Lamm stated that it was more of a hobby, and that the fact that his video blew up does not really matter to him.

Other people labeled as social media influencers do allow the number of likes to define them, though, only known for their TikTok views, as they seemingly appeared out of nowhere. An example of this is Charli D’amelio, who does dancing videos, and is internet famous at 15 years old.

“It’s not really that easy [to get famous] unless you’re Charli D’amelio, and you know how to dance because I’ve been trying, and I’m still not famous,” said senior Nina Aryal.

Influencers like this are what make the general public obsessed with fame, a change in the heart due to it being more accessible than ever, but that may not be a good thing. Now with the increased access to fame, many people believe that is what they want to pursue. Kids, trying to become famous, are dropping out of school to make TikTok and YouTube videos, even though it is not a feasible or even an actual profession. Not many of them, in reality, are lucky enough to actually make it big or make a sufficient amount of money to live. Social media apps like TikTok are raising the hopes of fame for a generation that has the technology and imagination to believe it is true, which might not always be a good thing.